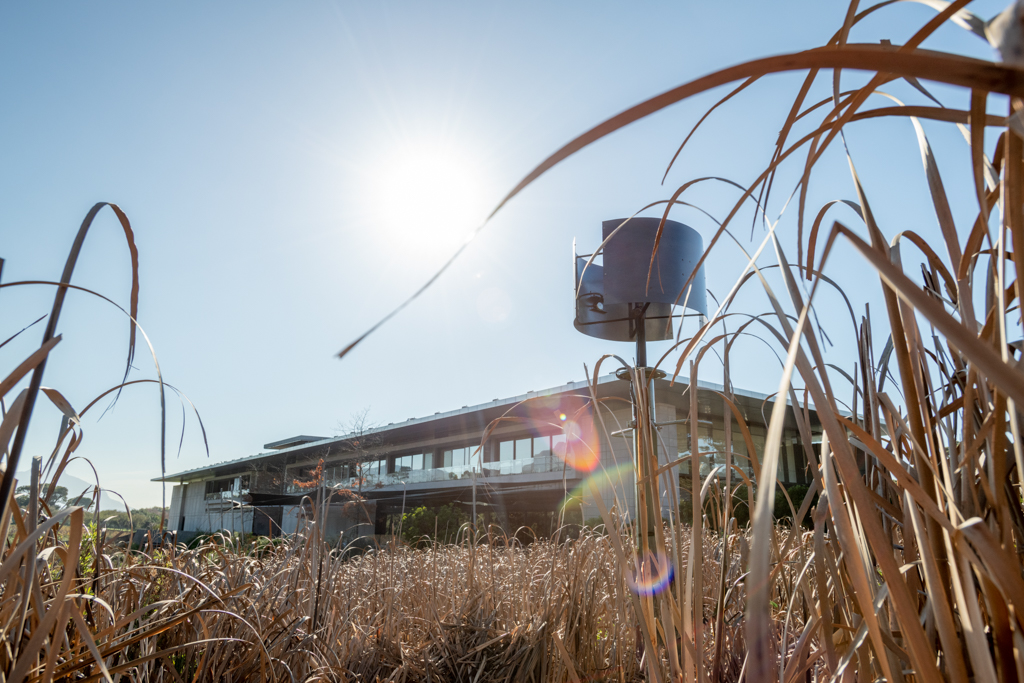 As Yet Untitled: James Webb

Norval Foundation is pleased to present James Webb’s As Yet Untitled (2021), a site-specific, sound installation, on view until 2023.

Obscured within the Cape Lowland Freshwater Wetland of Norval Foundation’s Sculpture Garden, As Yet Untitled’s physical presence is inconspicuous, with a utilitarian visual language reminiscent of scientific apparatus and municipal infrastructure. The sounds are produced in response to the astronomical phenomena taking place in the skies above the Foundation, controlled by software which has been specifically programmed for this purpose. Sound waves swell into brief crescendos, in sync with the rise, culmination, and setting of the sun, moon, planets, star clusters, and galaxies. These tones and crackles of static resonate through specialised transducer speakers that cause the sculpture’s structure to vibrate with sound. Arranged not by a composer, but by the rhythms of nature itself.

Webb subverts the scientific and cultural associations commonly assigned to celestial bodies in the West and its former colonies, laying bare the constructed nature of our relationship with space, which we take for granted. The title refers to this mediated relationship. Consider that Jupiter, Mars, Venus, and the rest of our solar system have existed for 4.5 billion years before Greek mythology could name, gender and narrate their histories, and will likely exist for billions of years to come. As Yet Untitled makes its audience conscious of their specific location in time and space. This awareness extends beyond the expanse of space, to the minutiae of the garden’s flora and fauna. The installation offers an immersive and meditative experience: the sway of the reeds in the wind, the clicking of the leopard toads, the trickle of rainwater into the vlei, are all caught in the sonic web of the work.

James Webb is a conceptual artist, known for his site-specific interventions and installations. By shifting objects, techniques, and forms beyond their original contexts and introducing them to different environments, Webb creates new spaces of tension. These spaces bind Webb’s academic background in religion, theatre, and advertising, offering poetic inquiries into the economies of belief and dynamics of communication in our contemporary world.

As Yet Untitled will act as a site for conversation and collaboration through the Foundation’s programme of talks, concerts, and other artistic engagement.

Click here to see the astronomical events currently occurring in sync with As Yet Untitled.