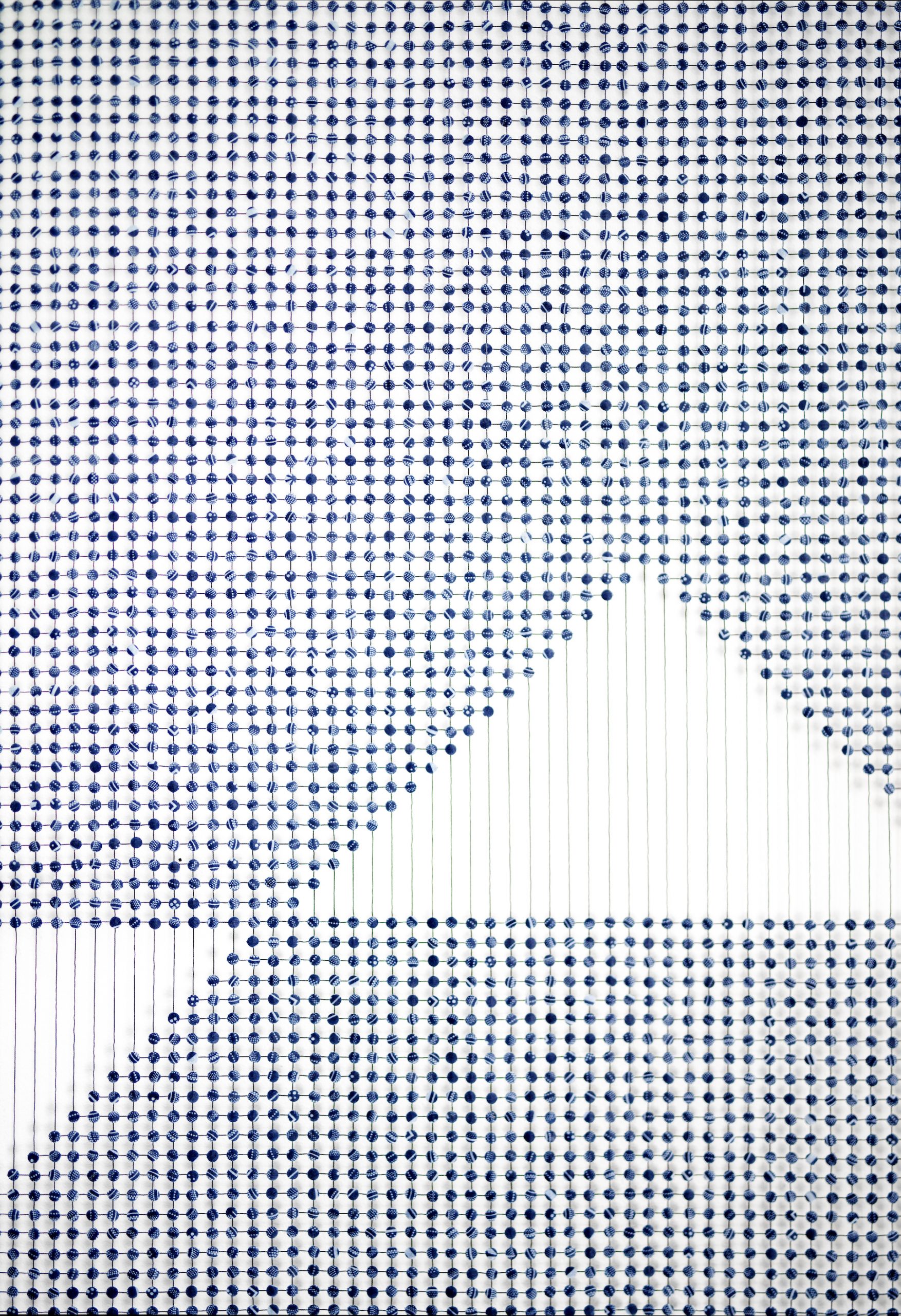 From her earliest works to the present, Kavula’s art has existed between the intersections of painting, printmaking, drawing and sculpture, pushing the limitations of each. Initially creating the punched circular discs from canvas, Kavula has moved to using traditional shweshwe cloth, invoking cultural, ancestral, archival and historical connotations specific to her work. In Kavula’s sewedi sewedi (Sewedi being her mother’s maiden name), she paid homage to her elders and ancestors by naming works aer late loved ones. Using her mother’s red shweshwe dress (a family heirloom) as inspiration, Kavula’s work can thus be read through the lens of memory – both collective and individual. Through her work the artist “reimagines everyday materials”¹, an idea noted by writer Nikita Keogotsitse. Kavula’s work can therefore be likened to rhopography – a painting genre in which everyday objects used by people are brought before our eyes or put on display in a way that makes us think about them anew and makes us contemplate human presence and absence.

As with the Modernist, minimalist artists which Kavula’s work has been likened to (although coming from a dierent time and context), Kavula’s art and art-making practice can be seen as asking critical questions about art itself. In this sense her artworks are self-aware, deconstructing and abstracting the medium to its most basic parts. Kavula configures simplistic yet mathematically intricate and calculated (by observation) artworks, using basic components such as line, colour and texture to create spatial fields of depth, which viewers can “travel through […] with the eye”² , as the modernist art critic Clement Greenberg noted. While creating artworks which are abstract in nature, Kavula’s works are not bound to strictly formalist readings. In 3x an abstraction: New methods of drawing by Hilma af Klint, Emma Kunz and Agnes Martin (2005), curator and art historian Catherine de Zegher explains that the three artists listed in the title approach “non-objectivity and geometric abstraction not as a kind of formalism, but as a means of structuring philosophical, linguistic, scientific and transcendental ideas”.³ While formalist in nature, Kavula’s work can similarly be seen as giving non-figurative form to metaphysical ideas. Bonolo Kavula: Lewatle evolves the themes explored in Kavula’s previous exhibitions. By referring to the ocean as a spiritual place – a place of cleansing, healing and ancestral connection – Kavula opens up new avenues for the reading of her work, both conceptually and visually. The ocean as a place rich with variations of colour, sound and movement (yet possessing stillness and quiet in places) as well as a place which is expansive, enveloping and unknown, encapsulates the dynamism and scale Kavula pushes in her exhibition at Norval Foundation. Kavula, who has mentioned that she does not prescribe meaning to her artworks, facilitates viewing experiences that allow for new interpretations of her work.