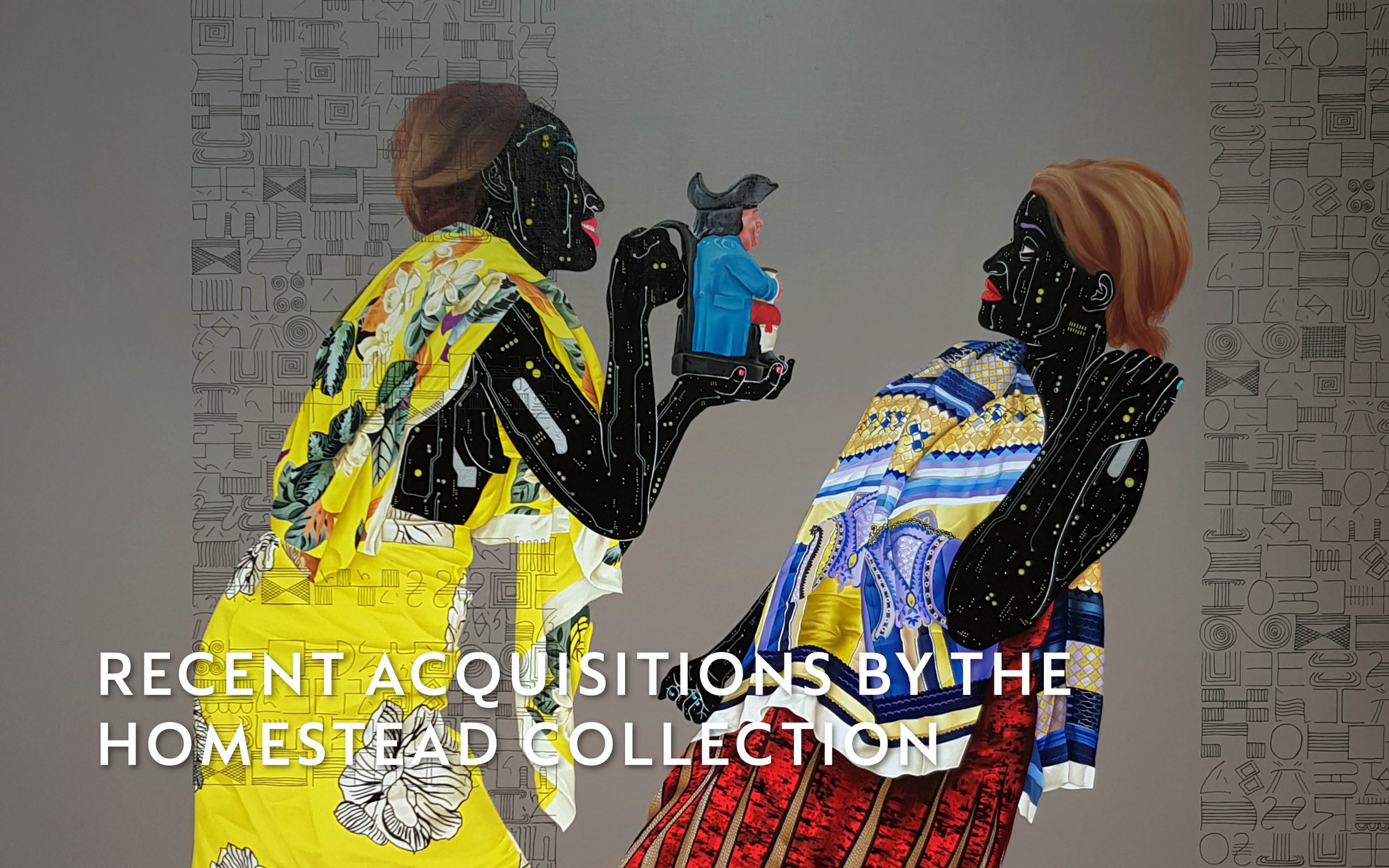 Recent Acquisitions by the Homestead Collection

Recent Acquisitions by the Homestead Collection brings together a series of artworks that speak to the evolving identity of the Homestead Collection, a major resource housed at Norval Foundation. These artworks are from the twentieth and twenty-first centuries and have been created by artists from across Africa. The exhibition is broadly made up of four thematic groups as a means to understand the varied nature of the artistic languages represented.

The first group uses the animal as a means to reflect on human fear and its transcendence. In Georgina Gratrix’s Guard Dog, the humour of the ‘fearsome pup’ belies a darker existential threat—or it may be an antidote to it. Similarly, the gorilla and poodles in Kate Gottgens’ Harvey, are absurd in contrast to the decaying opulence they’re depicted in. The painting becomes poignant when one recalls that 2017, the year Harvey was completed, is the same year that the serial abuse of women by disgraced media mogul Harvey Weinstein came to light. The gestural mark making of Gratrix and Gottgens finds its contrast in the precision of Alexis Preller’s Sweet Bird of Youth. In this image a single egret, a bird which appears throughout Preller’s oeuvre, gazes toward an immense depth and the indeterminacy of the light beyond. This was the last painting that the artist completed, and can be read as a meditation on mortality.

The second group brings together two artists from the Democratic Republic of the Congo (DRC) whose Pop-inflected figurative painting speaks to the aesthetic traditions of the region as well as their contemporary realities and position within a global context. Chéri Samba’s College de la Sagesse, or college of wisdom, draws upon the urban signage of Kinshasa while using different registers of language to communicate a global message: the three heads, while racially distinct, share the same invisible core and one curiously balances a globe on their tongue. Eddy Kamuanga Ilunga’s Reveil d’inconscience, Conscience Fragile and Conscience Fragile II, all depict striking interactions between figures encoded with digital circuitry and wearing traditional cloth. The DRC is the world’s biggest exporter of coltan, a material central to the production of electronics, often in China, but it is also a source of immense conflict in the country. The brightly coloured kanga cloth, which was previously produced in the DRC, is now also imported from China. The draped fabric of the figures is a language in its own right, while the Toby Jug is a symbol of British colonialism within a west African context, and here becomes a central focus between the figures.

Within the third group are artists who share an interest in the compositional capabilities of line and space. Gerhard Marx’s Towards an Interior Space uses the language of rational geometry, represented by repurposed maps, to create a contradictory spatial logic. In a parallel approach, Elias Sime’s Tightrope: Noiseless 16 makes use of reclaimed circuit boards to corrupt logical systems into new gestalts that are aesthetically and conceptually motivated. The mid-century artist Ernest Mancoba, whose painting Untitled is displayed here, shares a similar interest in an abstract visual language but its autographic mark allows for a more personalised vision. Like Mancoba, Karel Nel’s Folded World seeks to represent the ineffable, yet this in tension with a precise spatial rendering. The familiarity of built environments is subverted, producing a more mysterious experience.

In the final grouping, Pierre Fouché’s Bathers II and Cinga Samson’s Into Entle 13, while materially different, both interrogate contemporary masculinity. Fouché’s Bathers II thematically and visually references the bathers seen in Western art of the late nineteenth century. The image of two men wading in the sea dissolves into a series of marks when seen up close, similar to the Pointillist paintings of Post-Impressionism. Unlike these paintings, Bathers II is a schematised assemblage of dice, bridging the abstraction of Sime and Mancoba with the figurative work of Ilunga and Samba. Masculinity is placed within the context of male bonding, subtly suggestive of queer intimacy. Samson’s Into Entle 13, focuses upon his own relationship with his image and masculine identity. Like the Renaissance self-portraits of artists like Rembrandt, Samson depicts himself wearing a signifier of class – a gold chain – over his bare torso, connecting virility to financial wealth. This association is particularly poignant given South Africa’s history of emasculating Black men through economic bondage and imposed poverty. However, the subject’s pupil-less eyes hint towards a spiritual channelling, suggesting a realm beyond the earthly, which complicates the connection drawn between masculinity and economic freedom.

Though the exhibition is placed within these four groupings, connections ricochet between the works. The myriad affinities and disparities present here are illustrative of the broad cross-section of artistic practices taking place within African art, and the nuanced collecting activities of the Homestead Collection.